BOOK YOUR SOCIAL ROUND HERE
Menu

When Cammeray Golf Club was formed in 1906 it was the closest golf club to Sydney itself, notwithstanding that it was on the northern side of Sydney Harbour.  It was in an idyllic setting, with views to the north over Middle Harbour.  Today the Club is in the same location, has the same views, but instead of being in the tranquil setting of 1906 it has busy highways adjoining the course which, fortunately, do not stop golf being played.

Cammeray was founded following discussions on golf between members of the nearby Neutral Bay Lawn Tennis Club, which was formed in 1892.  The first President was J S Cargill, the Solicitor for Railways, followed by F Alderson in 1907 and 1908 and C R Cross man from 1909 to 1924.  Other early members were A L Grieve, Judge Backhouse, J Deighton, W O G Hughes, T Mitchell, A A and F J Wilson, W P Pope, J Paton, R G Scott and G Sautelle.

The first Championship, held in 1908, was won by W Kelman, manager of the Commonwealth Bank of Australia and (as mentioned in the Royal Sydney story, p.21) consideration was given in 1907 to a proposal to amalgamate the Cammeray and Royal Sydney Clubs.

The links, of 9 holes, were laid out in Cammeray Park, a lease of the greens and tees being obtained from the North Sydney Council.  A cottage situated in Park Avenue was rented to serve as a clubhouse, and after a few years the Club moved to larger premises, Cammeray House, on the corner of Park Avenue and Sutherland Street.  In 1938 the Club decided to build its own clubhouse in Cammeray Park and, after an enquiry under the provisions of the Local Government Act, was successful in obtaining a lease of land in the park to accommodate the building, a car parking area and a practice putting green.

Following the extensions to Warringah Expressway, 1965-68, the links were completely redesigned, resulting in Cammeray now being a tree-lined links, with good fairways and greens.

In the following year, 1907, the Committee gave consideration to a proposal to amalgamate the Cammeray and Royal Sydney Clubs.  It was decided to approve the scheme “provided that each member of the Cammeray Club submit himself for election in the ordinary way, and that the entrance fee for each member whose name appears on the Membership List of the Cammeray Club be 1 pound / 1 / -.”  In December there is a further Minute that “provided that not less than ten of the present members of the Cammeray Club be put up for election within two months from this date, the entrance fee to be charged to those elected be 1 pound / 1 / -,” but there is no record of any further steps being taken in connection with the proposed amalgamation, and it seems to have been abandoned. 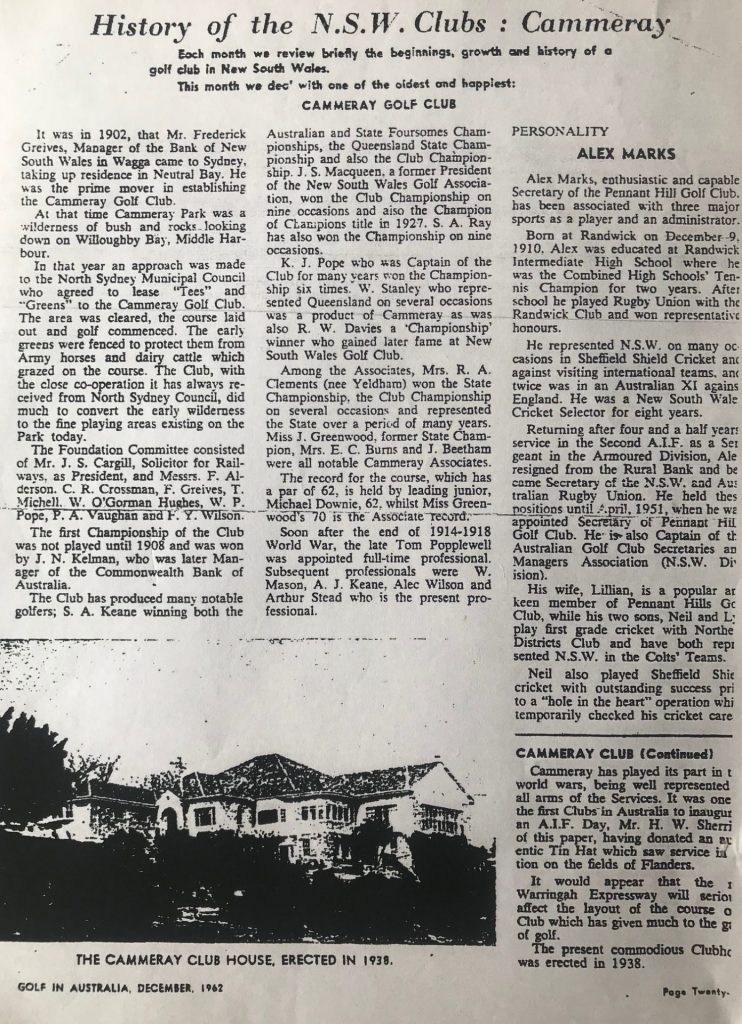